Home office renovation | before & after 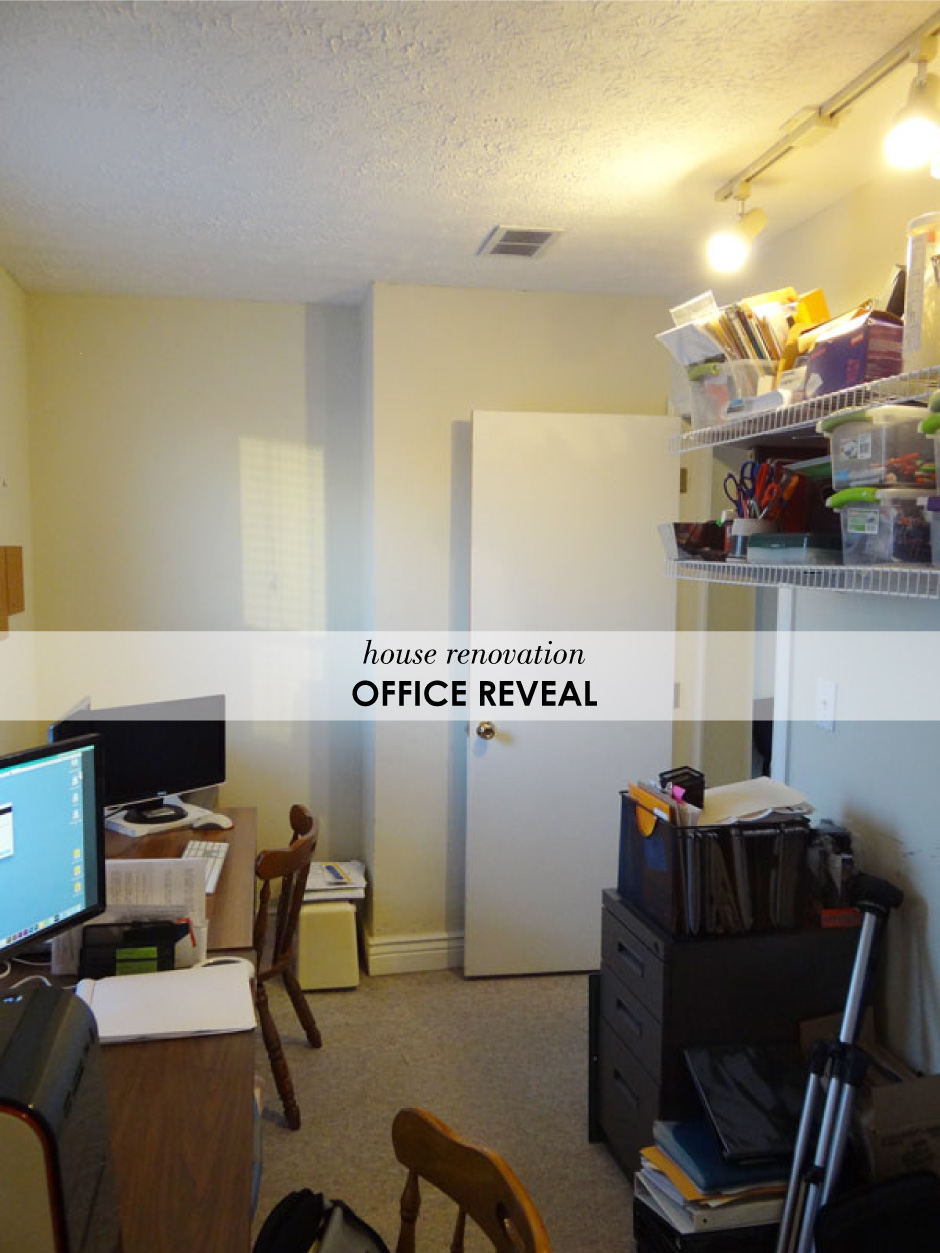 Oh, the old office. It was the catch-all room for everything that had no better place to go. And our, um, “open shelf” storage concept had some room for improvement to say the least. We bought those tables and file cabinets from the Ohio State University surplus store in 2010 for $45. We ended up selling the file cabinets for what we paid for them 6 years earlier, so that actually wasn’t that bad of an investment. And those chairs! They fell apart every time we sat in them. Why did we live with it for so long?? 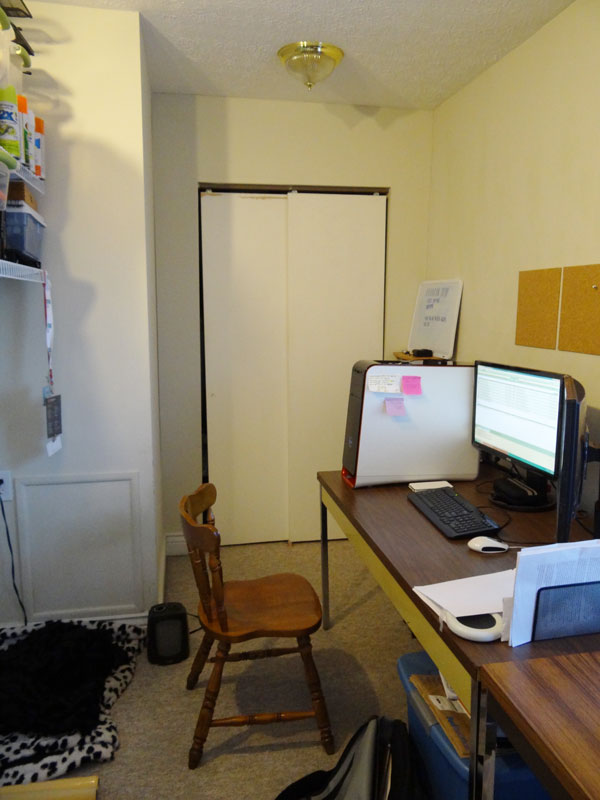 Ready for the for the after?

The number one thing that helped with this room was getting rid of all the crap. We said Sayonara to the giant drafting table that was never once unfolded while it was in this house, Adios to the tubs upon tubs of pens, markers, stickers, and other random office supplies we had accumulated over the years – don’t worry, we donated what we could so the items didn’t go right into the landfill. I still think we could get rid of more (notice I’m not opening that closet…) but we’ve done a pretty good job.

The number two thing (or maybe tied with number one) that helped with this room was getting rid of that carpet! Like I said before, the cat urine smell of that carpet just wouldn’t go away and we had to get rid of a layer of subfloor and then seal it with a super potent primer to really lock out the smell. I’m happy to say, the smell is gone. 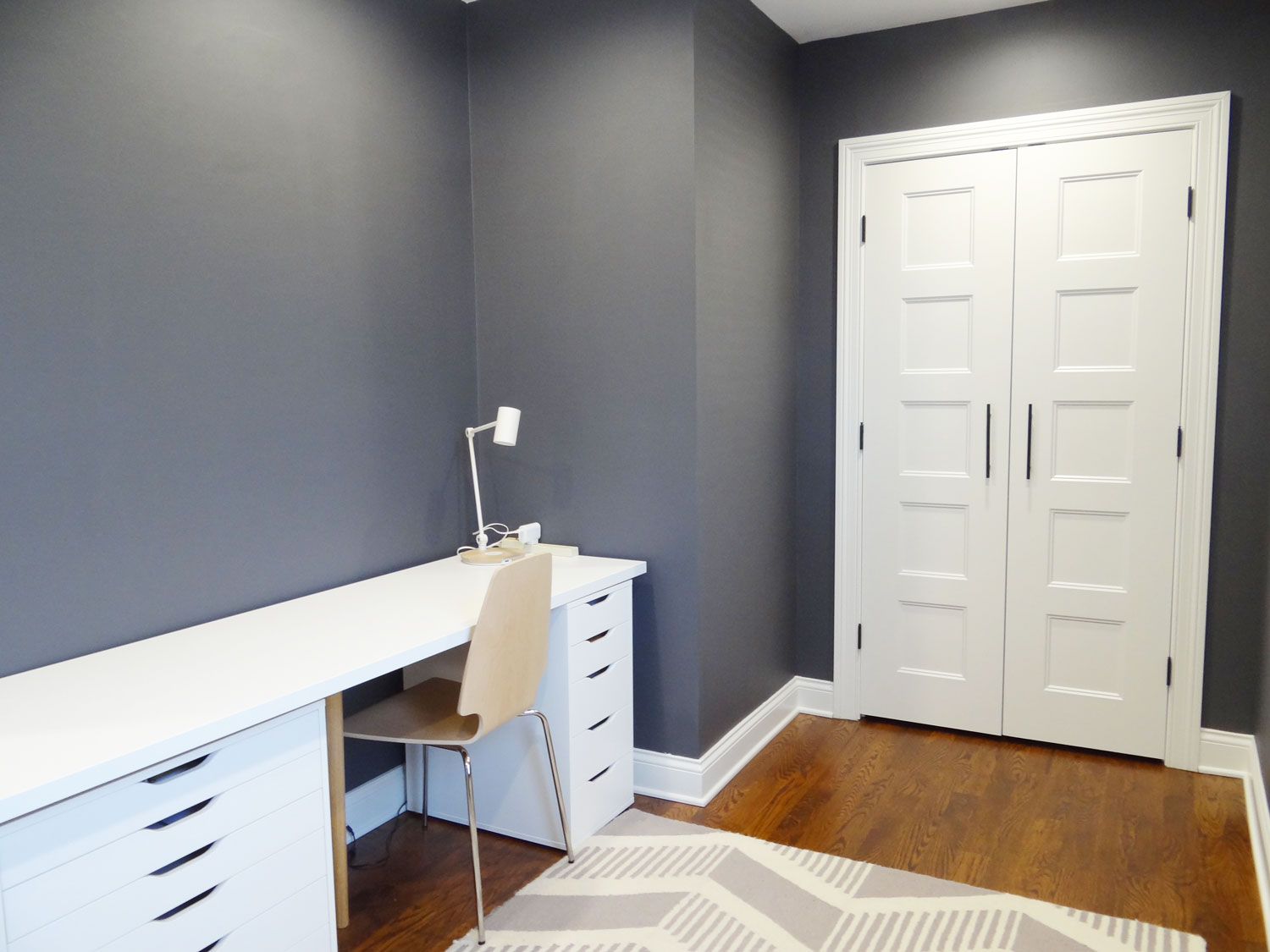 The paint color is Sherwin Williams Peppercorn (SW7674) and I’m totally in love with it, though I had a slight scare in the beginning. I was painting this room by myself while B worked on other things out in the hall, and when the first roll strokes went on the wall I had a bit of a panic attack because it just looked SO dark. I quietly shut the door so B wouldn’t come in and freak out, too. He did come in eventually and wasn’t as worried about it as I was. I actually didn’t really fall in love with it until the next day, but now peppercorn has totally grown on me. I love how it makes the white trim and doors pop, and I think it makes the small room feel bigger. SW7674 for the win! 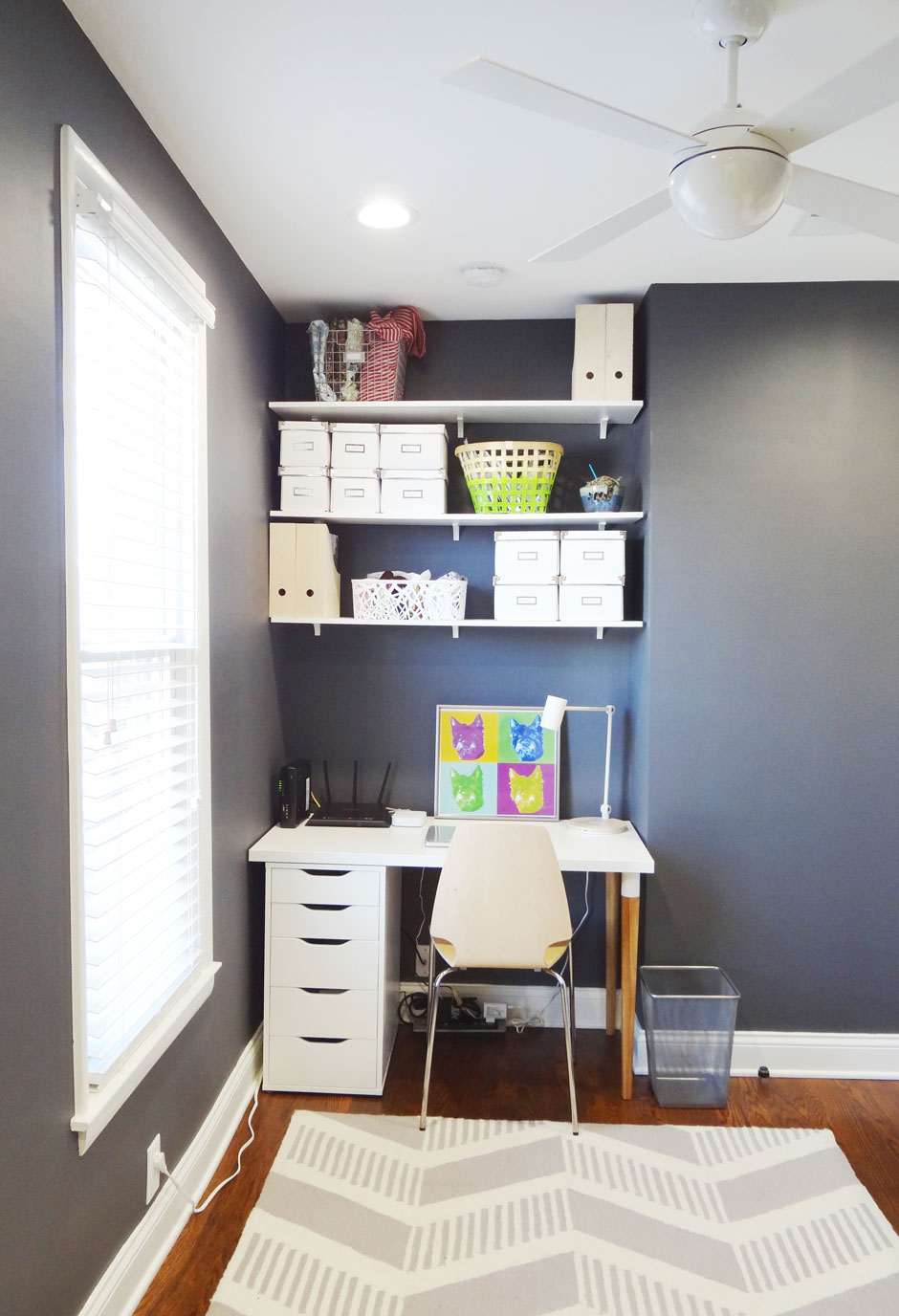 So here’s a “man I wish we would’ve done that” story: back in the “old house” we had a cable line on the opposite side of our bedroom that was tacked along the wall around the room and cut through the wall into this room. One of our goals was to get rid of the tacked-on cables lining all of our baseboards.  We had to jump through some hoops to get the cable jacks put in. Seriously. It doesn’t seem like it would be that hard, but never under estimate the difficulty of dealing with cable companies. Anyway, we knew we were going to have the router in this little nook so we told the contractor to put the jack centered in that wall. Great! Cable access tucked away! But what didn’t we put there?? An outlet! Gah! We didn’t realize this until we were moved in and hooking up the internet and the only place to plug in everything was in that little plug under the window. I should have been a better blog photo stager and taken out the cord prior to photographing, but then I wouldn’t have been able to share that valuable lesson.

Making more efficient use of the little nook made a huge difference in the space planning. Luckily the Ikea Linnmon table top is exactly the right size for that space. We originally envisioned the Lack floating shelves above the desk, and actually bought them and started to install them, but unless you’re planning on storing feathers and blown up balloons on your shelf, those suckers aren’t going to hold anything! We took those back and decided we had to shelves with brackets because we needed the shelves to really “shelve” things.

Overall, the room looks a little “Ikea Showroom” since almost everything in there is from Ikea and it could have some more personality sprinkled into it, but we’re happy with the improvement.

A quick before of the hallway doing its hallway thing:

In the shot above you can see the awkward closet door that we reworked with a built-in dresser in the bathroom. 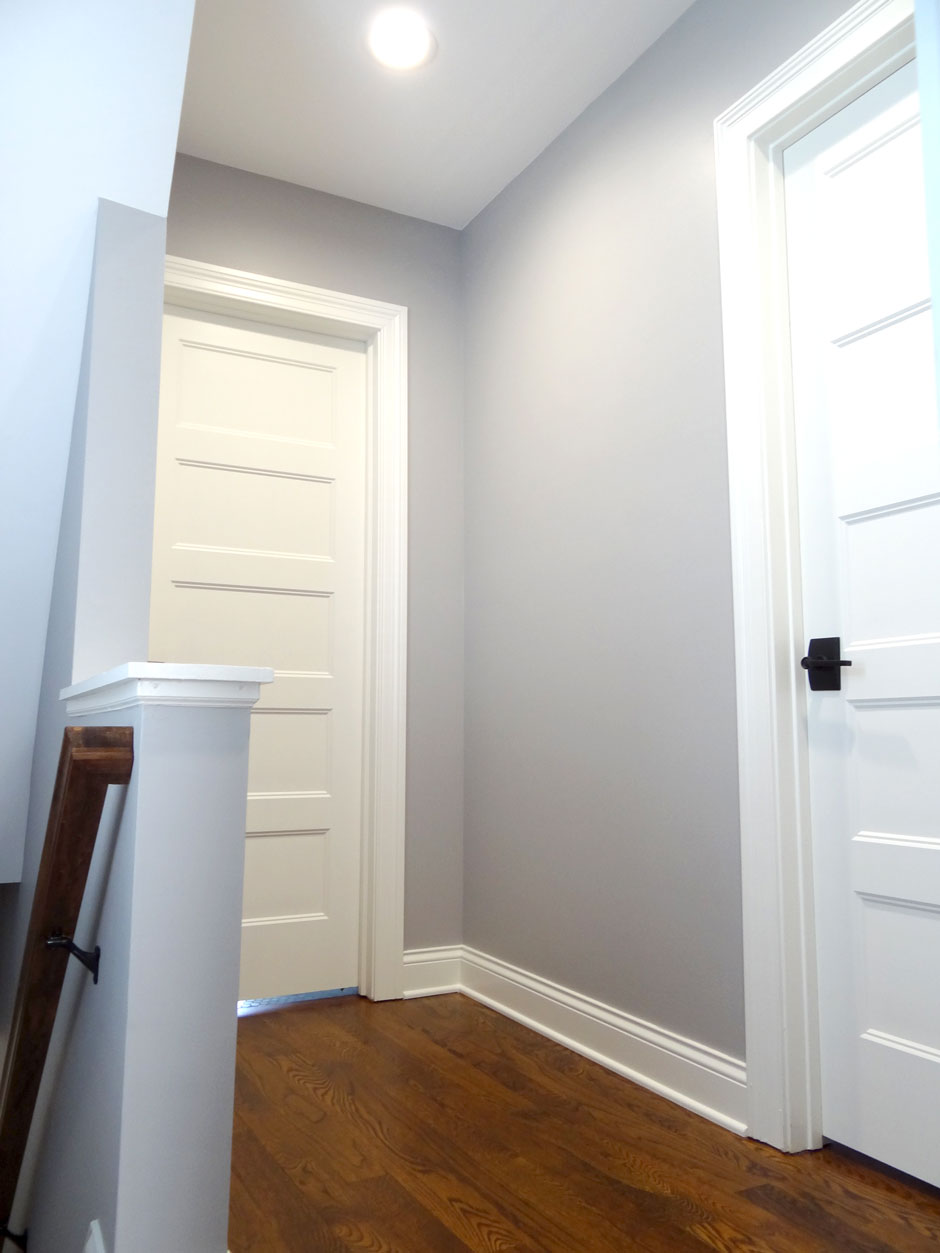 Originally we were just going to replace the carpet in the hallway, but then the floors just looked so good and we had them keep going into the hallway…and bedroom… 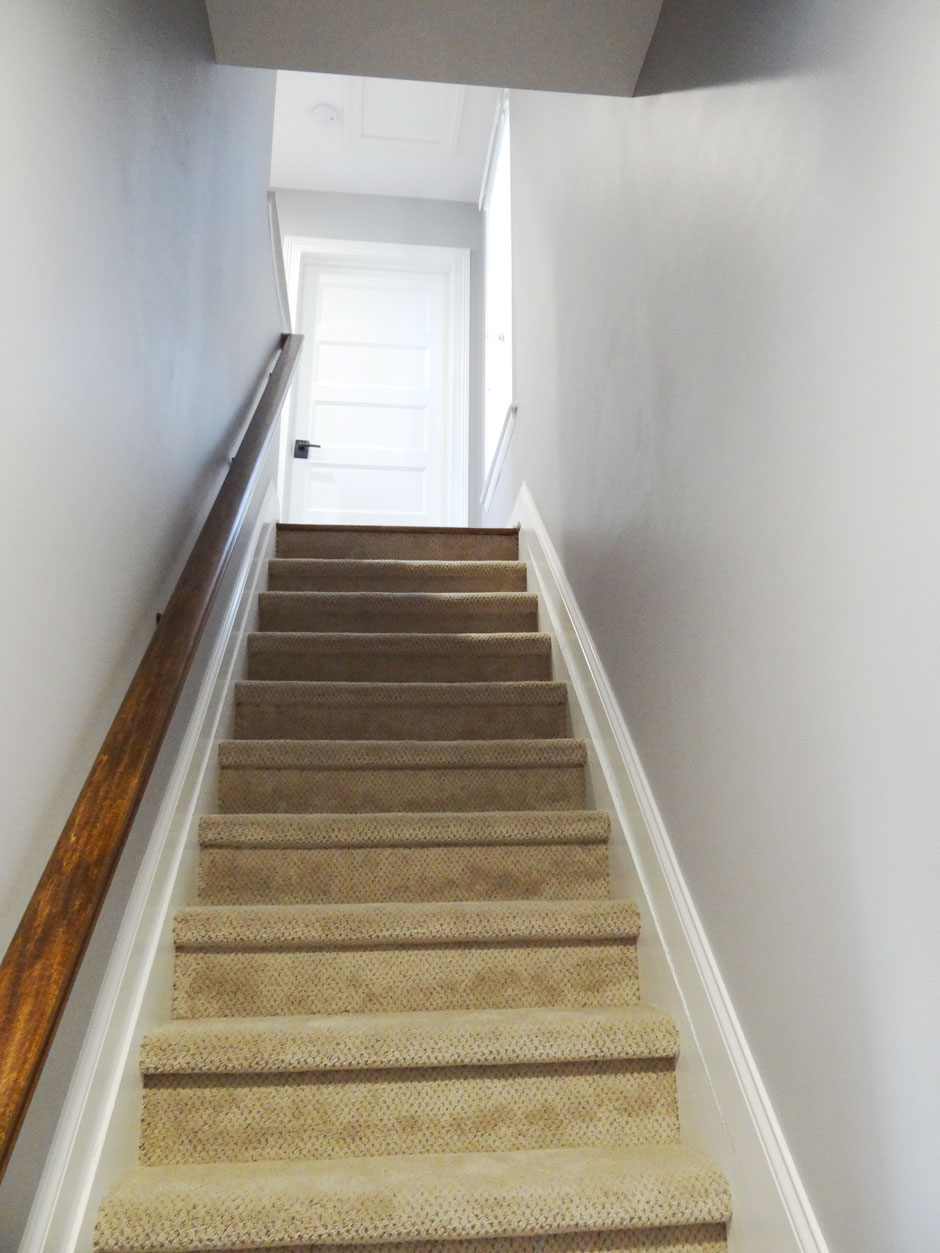 We did end up carpeting the steps as planned. The stairs were in such bad shape and completely refinishing them would have been mucho moolah. Plus they are steep. So in the interest of our wallets and everyone’s safety, we carpeted those bad boys. We also had to get a snazzy new handrail that returned to the wall for code purposes. And that’s about all I can say about the steps.

Whoowee! I’m nearing 1,000 words. That’s enough for today. Coming up next: our bedroom!

Bathroom renovation | before & after

bedroom renovation | before & after 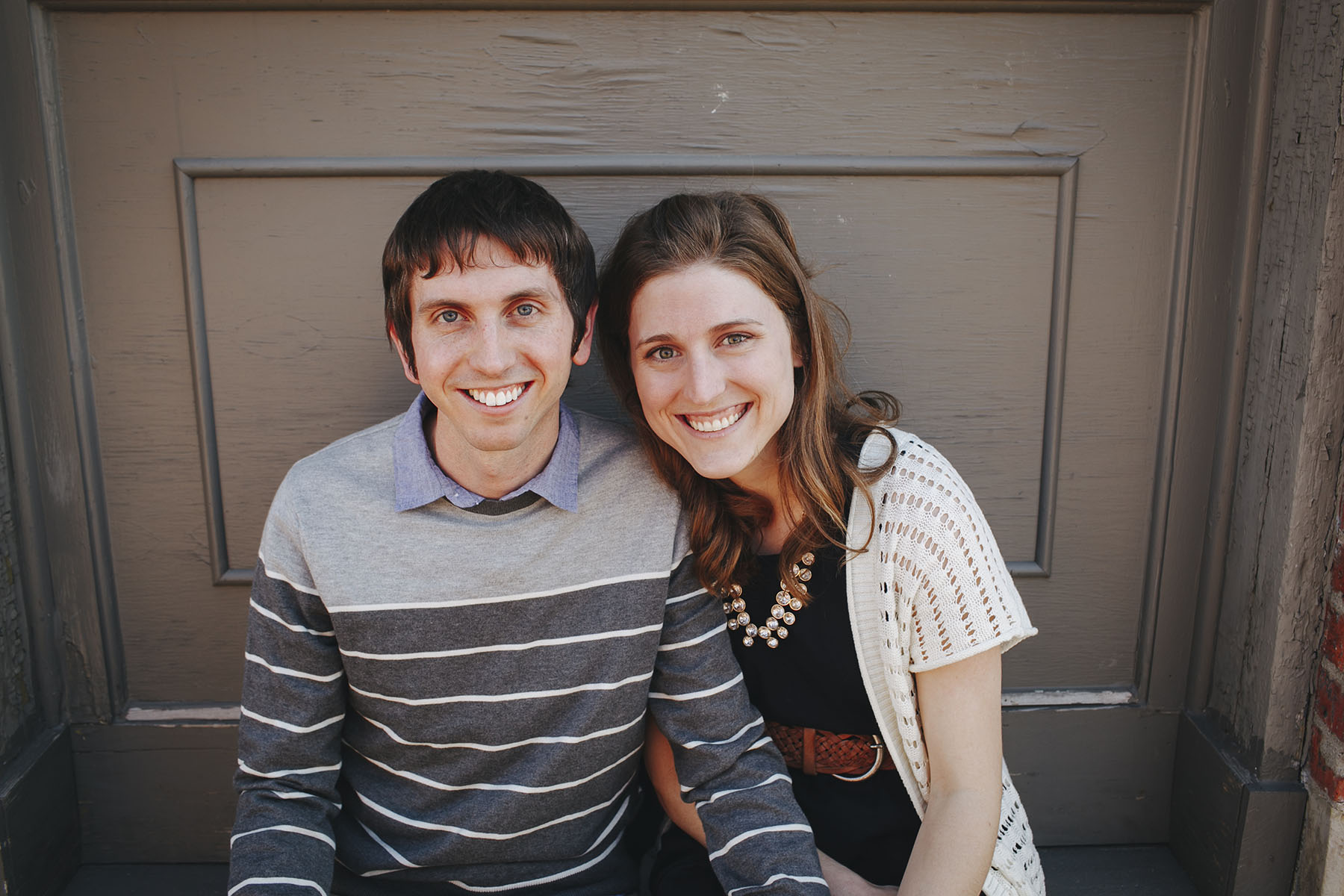 Hi! I'm Steph. I do stuff. I blog about it. Mostly crafty and tasty stuff, but you never know what my next project will be. You can find out more here.

Unless otherwise noted, all images and content are created by me. All opinions are always my own. If you want to share anything you find on here please be kind, link back and credit me.

Made with in Columbus